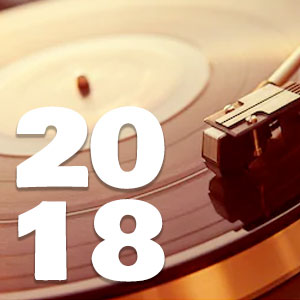 Our favourite albums of 2018 and a few festive bonuses

Our final event of the year was a festive best-of, where we gathered together to share our favourite songs/albums of 2018. We also ran a pre-event survey for everyone to nominate their favourite albums of the year. Using some extremely scientific methodology (eg. adding together everyone’s scores for an overall tally), the top 8 albums of the group came out like this:

Clearly the Low album was the biggest winner, so we heard a song from it on the night. Big thanks to Joe Grassby for suggesting this concept!

We also tallied up some stats for the year in OTR:

As is now traditional, we embarked on our Christmas quiz. I reproduce the questions here for posterity:

We heard a sample from each album played over the year.

Q: What was the average score for OTR albums this year?

Q: How many of the ten records we listened to were released in the 1980s?

Q: Which of these words was really used to describe an album?

Q: Eddie Clarke of Motorhead fame died in January of this year. What instrument did he play

Q: We also lost Aretha Franklin – in what year did her first studio album come out?

Q: There was a total lunar eclipse on January 31st. In the song Total Eclipse of the Heart, complete this line in the chorus: “We’re living in a powder keg…”

A: And giving off sparks

Q: In May, Israel won the Eurovision Song Contest with Netta Barzilai’s song “Toy”. Which country’s culture was she accused of appropriating in the performance?

4. Who said it: Morrissey or Farage?

Q: “When someone calls you racist, what they are saying is “hmm, you actually have a point, and I don’t know how to answer it”

Q: “Brexit did not happen. The EU wouldn’t allow it to happen. It is now a dead issue. The people said Leave but the EU said no”

Q: “You have the charisma of a damp rag, and the appearance of a low-grade bank clerk”

Q: “What’s the first thing I do when I wake up in the morning? Wish I hadn’t.”

Q: ”The euro Titanic has now hit the iceberg - and there simply aren’t enough lifeboats to go round.”

Q: “The rhino is now more or less extinct, and it’s not because of global warming or shrinking habitats. It’s because of Beyonce’s handbags.”

Q: “Madonna reinforces everything absurd and offensive. Desperate womanhood. Madonna is closer to organised prostitution than anything else.”

Q: “Will I ever forgive the British media for what they’ve done to me? No.“ (Farage)

After the quiz fun, it was time to share everyone’s nominations for their favourite songs/albums of the year. Here’s the list of everything that was nominated (the playlist is below).

Quite a few other songs were nominated by the above folks, and they’re all on the playlist below. Thanks for your choices!

It only remains to thank all the good folks who hosted OTR this year: Martin, Steve, Abdul, Lauren, Russell, Ruth, Lewis, Calum and Andrea. Thanks for a great set of events and looking forward to 2019.

See above to see who nominated each song which matched our theme, "2018 in Review".