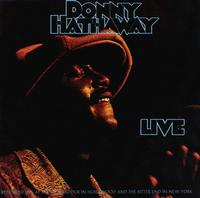 Incredible live performances that captured the energy of an artist

Off The Record #27 saw a bunch of us gather to listen to 70s soul/jazz maestro Donny Hathaway’s seminal 1972 live album, simply titled “Live”.

Our host Calum Mayer chose the album because of his love for its quality, ambience and breadth of performance. As well as the eight songs (a mixture of covers of recent standards and originals), several songs feature lengthy solos by Hathaway’s talented band.

After concluding our now-traditional Halloween quiz, we sat back to drink in the mood and feeling captured over two distinct concerts Hathaway played in 1971 at The Troubadour in Hollywood and The Bitter End in New York.

Opening with a cover of the recently-released Marvin Gaye classic “What’s Going On?” and also including covers of John Lennon’s “Jealous Guy” and Carole King’s “You’ve Got a Friend”, the two sides showed off both Hathaway’s impressive vocals, his strong piano playing and his guitarists/drummer.

The sense of “live” in the room was really felt – lots of our attendees were grooving along as the album developed and the audience participation captured on the first half of the record really lent the event a feeling of “realness”, as though we were all really there in a small club listening.

Discussions afterward focused on the challenges of capturing live ambience and the “purity” of recording them (are overdubs verboten?). Some suggested the album was tracked suboptimally (eg. the slower, more chilled tracks in the second half would’ve worked better as openers). Everyone agreed on the quality of the performances though and there was a real sense the album was well-received.

Scoring confirmed this, with the room awarding not just one 10 / 10 (naturally, from a smitten Calum), but two (as well as five 9 / 10 scores). Even a “mediocre” 5 / 10 wasn’t enough to prevent the album’s average score of 8.1 / 10 becoming an Off The Record, um, record! Words like “transporting”, “intimate”, “timecapsule” and “vivacious” summed up our listeners’ responses to the album.

Then it was (briefly) over to the audience after the fun of the quiz to share their live songs. Here’s what we heard:

After this it was time to congratulate Calum on his highly-acclaimed choice, and to eat Halloween candy in celebration. Thanks all!

See above to see who nominated each song which matched our theme, "You Had To Be There".