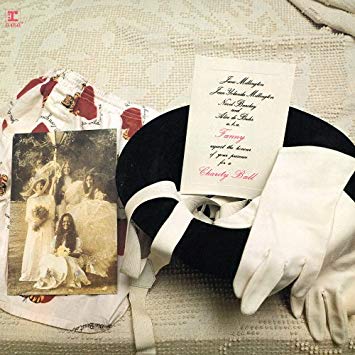 Albums by bands solely made up of women.

For February’s event we decided to mark the impending International Women’s Day by making our theme “Girl Groups”. We’d be listening to “Charity Ball”, the 1971 album from all-female group Fanny (that’s right, you read correctly), who came recommended by no less than David Bowie, who described them as: “one of the finest rock bands of their time. They were extraordinary… they’re as important as anybody else who’s ever been, ever”.

Our host was William McCabe, who’s spent most of his life in Birmingham and has “met far too many bands that you’ll probably never have heard of”. William introduced proceedings by clarifying that Fanny’s record label’s claim that they were the first all-female rock band was probably not true, but they were certainly up there. While “girl groups” these days tends to refer to a Motown-heavy genre/tradition, we were using the term more generally to refer to bands made up solely of women, which Fanny certainly were. After a little history about what the band got up to after this record (including backing Barbra Streisand, and joining an all-female, all-black band called Isis), we gave their second album, “Charity Ball”, a spin.

The album was only 11 tracks long, clocking in at about 45 minutes. Approximately half the songs were written/sang by pianist Nickey Barclay, with the remaining tracks quite stylistically different (and written/performed by sisters Jean and June Millington, and drummer Alice De Buhr). Reactions to the album were positive, with at least one person rating it 10/10 and describing it as “timeless”. Others were more balanced (“almost”, “solid”, “okay”, and the plain ol’ “good”) but we also got “anthemic”, “sexy enough” and “a beginning” (intriguing!), giving it a solid 7/10 score from our attendees.

Discussion afterwards centered around William’s questions about the role sex/gender play in music, and themes of equality, equal access, #MeToo and more. After that it was over to the group to share songs matching our “Girl Groups” theme:

Special thanks to William for hosting us, and all our attendees.

See above to see who nominated each song which matched our theme, "Girl Groups".