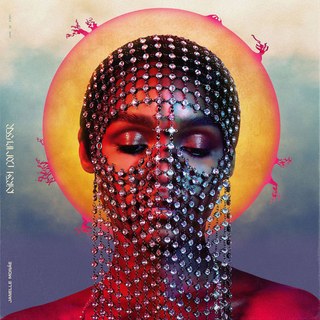 Albums/songs you've never heard (but have been electronically recommended)

A bit of last-minute planning (don’t take half a month holiday and then try to organise music meetups, folks), OTR 23 was ushered in with the theme “Trust the Algorithm”: the music we’d be listening to on the night would be previously unheard by the person recommending it. Instead, they’d be choosing albums they’d been recommended (whether electronically or otherwise) and having faith (or not) in the power of the algorithm to choose something they enjoy. We’d all experience the music together for the first time.

OTR founder Matt hosted us this month, choosing Janelle Monáe’s recent 2018 release “Dirty Computer” because he was a huge fan of her previous records, but had yet to listen to this new one. Trusting to the power of Spotify’s recommendation engine, though, he’d be hearing it for the first time that evening.

The album was the shortest yet of Monáe’s work, clocking in at 48 minutes compared to both the previous records’ hour-plus duration. Over 14 songs, Monáe explored neo-soul, hip-hop, pop, funk and R&B, and collaborated with Prince (before his untimely death), Pharrell Williams, Zoe Kravitz, Grimes, and a pretty-much inaudible Brian Wilson on the opening track.

The album itself was provocative and powerful, intertwined with powerful statements and explorations of female sexuality alongside searing critiques of society, pop culture, politics and technology. It was over to the group to figure out what they made of it:

In a word: explosive. This might have been the most lively post-album discussion ever held at Off The Record. The women in attendance (going first) talked about the aspects they found powerful and affirmative, highlighting the sexual freedom and critiques of structural racism in the songs.

Other attendees (though a minority!) were sceptical of the originality or relevance of the political side of the album, suggesting it had been done before or wasn’t particularly groundbreaking. The debate this provoked got fairly, um, spicy, at times.

Musically the album was well received, with standouts being the big single “PYNK” and “Screwed”, and “Make Me Feel” being universally highlighted as a poor man’s Prince (sorry, Janelle). Host Matt confessed he wasn’t as enamoured as previous albums, reflecting that Monáe’s newly-expressive persona (no longer hidden behind android metaphors) meant he felt like less of a member of the intended audience for this album (which was a good thing!).

Words used by the group included the following:

It was then over to the group to share songs matching our theme of “Trust the Algorithm” – the idea was that they’d choose a song they’d never heard but were either planning to listen to, or had been algorithmically alerted to. Here’s the songs they chose:

After this, it was the end of the night – thanks to everyone for coming out and the lively discussion (and Janelle Monáe for provoking it).

See above to see who nominated each song which matched our theme, "Trust The Algorithm".