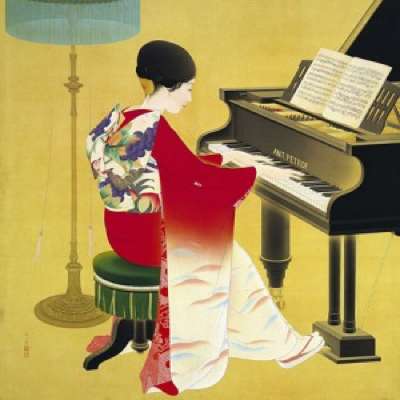 Albums where the artist sings in multiple languages on the record.

Our March event saw Off The Record regular Abdul return to host another event, fresh from last summer’s “A European Union” theme. This time around our theme was “Bilingual” – albums where the artist sings in multiple languages on the record.

The album we played was Kimonos’ self-titled debut, released in 2010. Kimonos are a Japanese supergroup (well, superduo, more like) consisting of Leo Imai (Metafive, Leo Imai) and Shutoku Mukai (Number Girl, Zazen Boys). The album contains both Japanese and English lyrics, and Abdul chose it because “it’s one of my favourite albums and I would love to hear what others have to say about it.”

Abdul introduced the album and talked about how popular Number Girl was in their native Japan, and how the album mostly featured Leo in English and Mukai in Japanese. He’d also provided translated lyrics so everyone could follow along, even in songs mixing up to three languages.

In a first for Off The Record, our initial playback was disrupted by a fire alarm which saw us temporarily evacuate the room (after clarifying that the alarm sound wasn’t a deliberate part of the opening track). Once restarting we began to uncover an album rich in lyrical ideas and melodies in its 45 minute length.

Over the course of its ten tracks the band switch sounds as frequently as they toggle language, mixing electronic/synth-driven pop with indie rock and folk-esque warbling. Most songs were long (4 minutes plus) but it didn’t feel dull, often developing a groove and sticking with it.

Reactions at the end were mixed – Abdul (clearly objective) scored “Kimonos” a 10/10, and four 8/10 scores were given. A few attendees really didn’t get on with it, though, giving it a 3.5 (“varied”) and 4 (“eighties”) out of 10, leaving an overall average of 6.9 / 10. With a reduced audience, though, the median score was 7.5 which felt a little more reflective of most people’s opinions. Lewis memorably described the album as an “optical illusion for your ears” and attendees used words like “hypnotic”, “surprising”, “infectious” and “playagainable” to describe the record.

Finally, it was over to the group to share bilingual songs, or at least, songs that weren’t in English. The primary language is noted in brackets after each track:

After this, it was the end of the night – thanks to everyone for coming out and thanks to Abdul for another brilliant night hosting!

See above to see who nominated each song which matched our theme, "Bilingual".