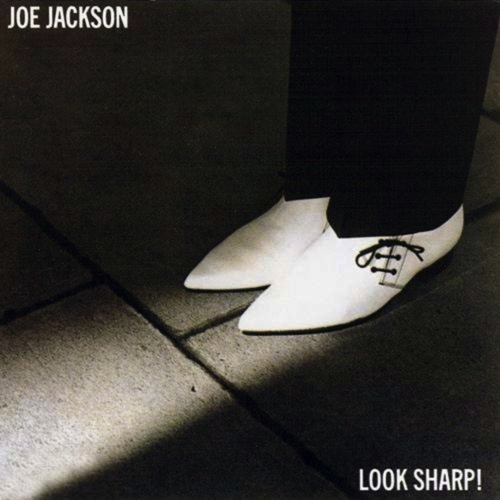 Albums whose cover artwork is solely black and white.

The Beast from the East tried to stop our fun on this frosty February evening, but it didn’t reckon with the hardy nature of the Off The Record devoted, who turned up in their droves (well, 10 of us) to listen to a night of music in monochrome.

Newbie-turned-regular Steve Whitty was our host for this cold evening – Steve is a civil servant from Sutton Coldfield who as well as being a music loving vegan is also a fan of Walsall FC (The Saddlers) – but don’t hold that against him. Steve’s theme was very novel: “Black & White”, eg. albums with monochromatic artwork. The record he picked was Joe Jackson’s 1979 debut, “Look Sharp!”. Steve began the night by introducing his theme with a bit of personal history:

“It was released around the same time I was getting into music – one of my first coloured vinyls was for his single “One More Time”. It was a 10” single in white vinyl and it also came with a pin badge with “Look Sharp” which I used to wear on my school blazer. Nobody I knew had heard of him, so he was my artist. I was mortified when “Is She Really Going Out With Him?” became a top ten single – Joe Jackson had been taken away from me. Having recently started to buy vinyl again, this album was one of the first I bought and it took me back to being at school when music was all that mattered to me.”

Everyone could empathise with that youthful attachment to an artist (and the subsequent feeling of outrage when they inevitably get discovered by everyone else). We sat down and gave the record a spin after Steve showed off a few “here’s what you could’ve won” records (eg. other black and white records he considered, including the Specials and, of course, the Stranglers “Black and White”).

For a fairly brief album (11 songs in 37 minutes) there were a lot of lyrics: Jackson’s rapid-fire delivery hovering somewhere between Elvis Costello post-punk and something a little more aggressive in places. We were surprised towards the end when a group of young fellows arrived at the session, and it turned out they were OTR newbies who’d valiantly attempted to attend but went to the wrong Cherry Reds (4 miles away) and heroically made their way back to the correct one before the end.

Responses were positive: everyone had something good to say about the album with scores ranging from 6-9 and words like “teenage” (Jackson was 23), “energetic”, “urgent” and “simple” being used to describe the tight music and smart lyrics (including the opening line Steve dubbed the best ever, “pretty women are walking with gorillas down my street”). The group average was 7.5 / 10 and it was over to the group to nominate what turned out to be some really good selections on the theme of “black and white”. Here’s the music that got shared:

After this, it was the end of the night – thanks to everyone for coming out and thanks to Steve for a brilliant night hosting!

See above to see who nominated each song which matched our theme, "Black & White".